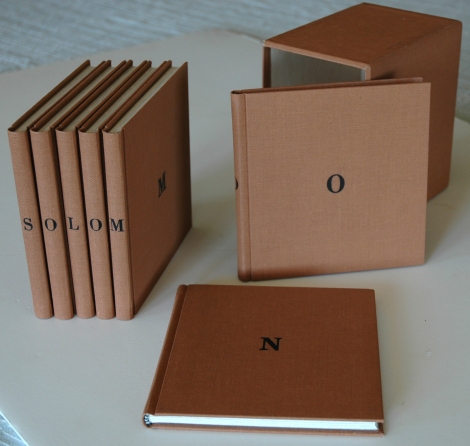 Description: Seven volumes exploring language and space in the context of the Solomon Islands. The work combines certain aspects of concrete poetry with historical and contemporary images and texts. Images for SOLOMON were derived from photographs taken in the Solomon Islands. The transparencies were transferred onto Kodak Photo CD and the images manipulated using Adobe 2.5 on a Macintosh computer. The words and images were arranged using Aldus Pagemaker 5.0 and printed on an Apple Stylewriter Pro Colour Inkjet printer on Canon LC201 coated paper. The pages were bound by master bookbinder Fred Pohlmann, Brisbane. 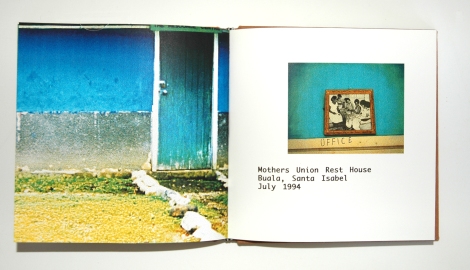 SOLOMON was produced after a journey to the Solomon Islands in 1994. The book presents, through text and image, a collage of historical and personal reflections on language and space against the backdrop of the Solomon Islands.  The structure and format of the work reflects the influence of Mallarmé and concrete poetry.The work develops invented relationships between language and meaning. For example, O signifies head, the sound emanating from the head, an oral culture, the spirit which resides in the head, the coconut and the small puncture left by the tatooist’s needle. The work suggests that these ‘inventions’ have been lurking within the name Solomon.

Each book has a particular emphasis but there are some elements which recur and bind the volumes together: ‘S’ establishes the analogy between space in the text, and space between the islands. The page and the ocean are surfaces for inscription; ‘O’  responds to the significant encounters and experiences that I had as a visitor to the Solomon Islands and notes the impact of the Second World War on the landscape; ‘L’ juxtaposes fragments of stories and diaries from a number of sources. It acknowledges power in the hands of the colonising forces to deliver a dominant vision of the Solomon Islands; ‘O’ is about headhunting, about singing, about the relationship between indigenous spirituality and Christianity; ‘M’ uses the clash of language which occurred under colonisation as its inspiration. It presents the development of pidgin and the development of an independent Solomon voice; ‘O’ takes the coconut as its subject. It posits an analogous relationship between its appearance and its name – the coconut as the ‘o’ contained within its own name. The book represents the many functions of the coconut in traditional society; providing fronds for the weaving of baskets, poles and cladding for dwellings, fence palings for pig enclosures, and coconut shells for drinking cups; ’O’ goes on to contrast this with the role and status of diesel in contemporary society, and ‘N’ returns to the theme of naming and completes the naming/weaving relationship.  It repeats and re-articulates many of the concerns and inventions of ‘S’ creating a certain resonance throughout the extended work. 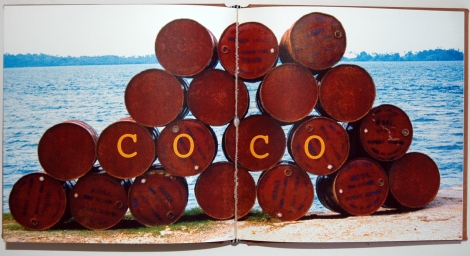 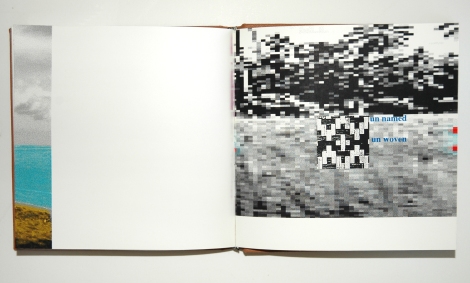